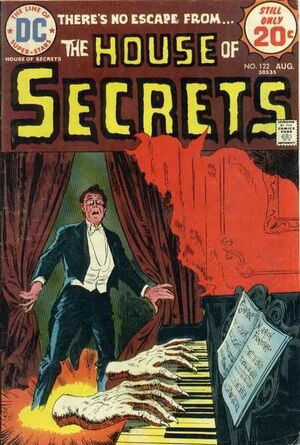 Appearing in "Requiem for Igor"Edit

Synopsis for "Requiem for Igor"Edit

The 2nd best pianist makes a deal with a witch for the hands of the best, but the thugs that the witch hired to murder the victim burn the body and Satan places the charred hands on to the would-be pianist.

Three hunters split up in the woods in order to look for a deer when one of them encounters a centaur. The centaur offers to take the man through a light portal to a paradise and the man agrees. The centaur tells the man he may stay if he wishes but the man declines. The centaur brings the man back to the woods with a warning that if he speaks of what he has seen, he does so at his own risk. The greedy man thinks only of how rich he will be if he gets his friends to help him capture a centaur, so when he sees them he calls out to them intending to enlist their aid, only to find that he has been transformed into a stag.

A widow tells the funeral director that her dead husband had all of his money placed inside his casket and offers to share it with him if he unseals the casket. At first the man refuses, but after the man is buried, he decides to dig it up. The widow covers him with a gun when he finishes, but he flings dirt in her face and then kills her with the shovel. He plans to dump her body in a casket and refill the grave, but the money bag causes him to slip into the grave where he hits his head on the side of the casket, briefly knocking him out, and causing the coffin lid to close. The old grave-digger he employs is hard of hearing, so when the old man sees the open grave and figures that he must have forgot to fill it in again, he begins burying his boss alive oblivious to the man's cries for help.

Appearing in "There He Is Again!"Edit

Synopsis for "There He Is Again!"Edit

Ushers are startled to see a boy who sneaks into the theater fall backwards into the movie screen and become part of the horror movie after they surround him.

Retrieved from "https://heykidscomics.fandom.com/wiki/House_of_Secrets_Vol_1_122?oldid=1434636"
Community content is available under CC-BY-SA unless otherwise noted.