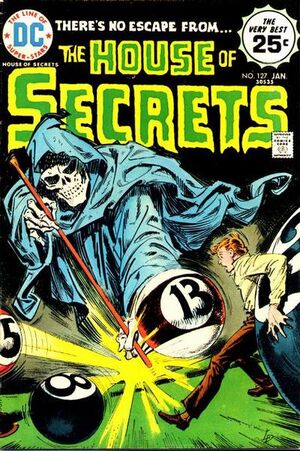 Appearing in "The Headsman of Hell"Edit

Synopsis for "The Headsman of Hell"Edit

A Frenchman during the time of the Terror obsesses over the identity of the headsman until he becomes scheduled for execution himself. He reaches up to yank off the black hood only to discover that there is nothing underneath.

Appearing in "A Test of Innocence!"Edit

Synopsis for "A Test of Innocence!"Edit

A man steals emeralds from an Amazon native tribe, but when he attempts to raft down river with the hollowed-out melon he's stashed the emeralds in, it rolls off the raft into the river. He reaches into the river for the melon but when he withdraws his hand it has been stripped of flesh by Piranhas. Shocked, he falls into the river where the Piranhas make short work of him.

Appearing in "Death on Cue!"Edit

Synopsis for "Death on Cue!"Edit

A pool hall bum steals a magic cue from an old man and beats him to death with it. He plays well until he has only one more guy to beat and then he will be champion but the ghost of the dead man shows up before the match. The ghost challenges him to a game, and even though the killer is using the magic cue, he plays terrible like he used to play. After the ghost defeats him he shrinks the killer and leaves him on the table. When the current champion shows up to play the match he figures that he will shoot a few balls until his opponent arrives. The killer attempts to avoid the deadly rolling balls but he ends up getting crushed between two of them.

Retrieved from "https://heykidscomics.fandom.com/wiki/House_of_Secrets_Vol_1_127?oldid=1434641"
Community content is available under CC-BY-SA unless otherwise noted.