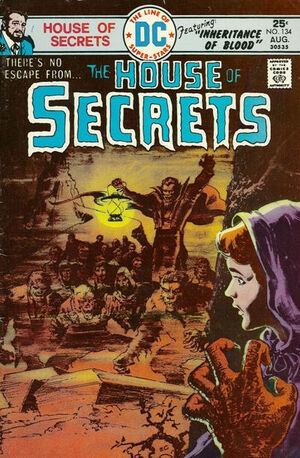 Appearing in "The Inheritance of Blood"Edit

Synopsis for "The Inheritance of Blood"Edit

A boy who goes to spend some vacation time with his cousins learns that they belong to a coven of werewolves.

Appearing in "The Last Out"Edit

Synopsis for "The Last Out"Edit

A vampire arrives in a small town to prey upon what he considers stupid inhabitants, but he ends up getting tricked by their mention of a "bat cave." When the villagers swarm him as a group and he attempts to flee, he discovers that the cave contains no bats to hide amongst but only two baseball bats left by one of the villagers as a pun.

Retrieved from "https://heykidscomics.fandom.com/wiki/House_of_Secrets_Vol_1_134?oldid=1434648"
Community content is available under CC-BY-SA unless otherwise noted.