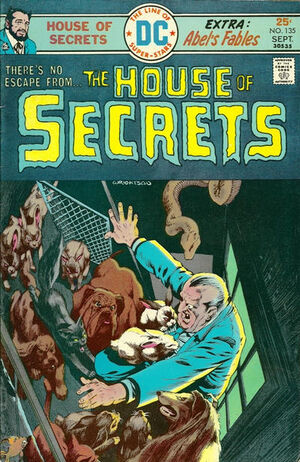 Appearing in "The Vegetable Garden!"Edit

Synopsis for "The Vegetable Garden!"Edit

When Aunt Harriet discovers that Bill has circulated rumors to drive away the neighborhood children, killed her parrot and wrecked her vegetable garden, all in an effort to put her away in an old folk's home and seize control of her money she is quite distraught. She murders him with a pair of garden shears, dismembers his body and buries its pieces outside in a newly redone vegetable garden, with signs that indicate where each piece has been buried.

Appearing in "Big Fish in a Small Pond"Edit

Synopsis for "Big Fish in a Small Pond"Edit

A man wants to buy a pet shop from an old couple who don't want to sell. The man's assistant dabbles in mysticism so he sends demons to possess the pets thinking that he'll get a raise for helping out. His employer is unaware of this so he breaks into the pet shop intending to start a fire. The transformed pets attack him and he is drowned in the fish tank.

Retrieved from "https://heykidscomics.fandom.com/wiki/House_of_Secrets_Vol_1_135?oldid=1434649"
Community content is available under CC-BY-SA unless otherwise noted.