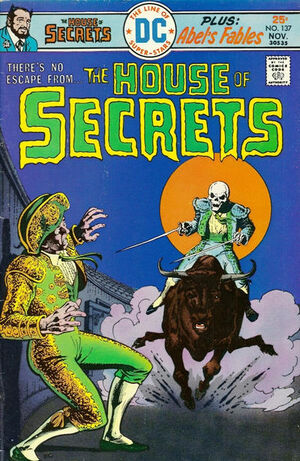 Appearing in "The Harder They Fall"Edit

Synopsis for "The Harder They Fall"Edit

A bum dreams that he is a ruthless businessman on the way to a senate seat when he is betrayed by the beautiful girl he is in love with. He is relived that his recurring falling dreams are no longer possible with the realization that at Skid Row, he's got nowhere further to fall.

Appearing in "The Magic Elixir"Edit

Synopsis for "The Magic Elixir"Edit

Appearing in "Suit of Lights"Edit

Synopsis for "Suit of Lights"Edit

This story is similar to "The Man Who Sold His Soul!" in Suspense 25

Retrieved from "https://heykidscomics.fandom.com/wiki/House_of_Secrets_Vol_1_137?oldid=1434651"
Community content is available under CC-BY-SA unless otherwise noted.