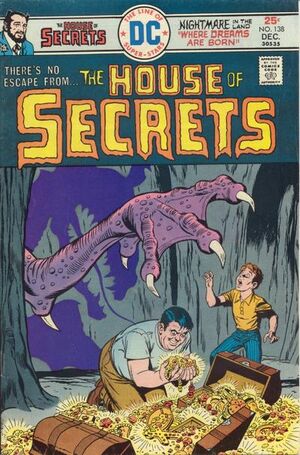 Appearing in "Where Dreams Are Born"Edit

Synopsis for "Where Dreams Are Born"Edit

A boy who can enter dreams based on what he reads immediately before he falls asleep and return with the material wealth that he finds in these places is tormented by his greedy foster parents who demand that he take them with him into his dreams so that they can fill up suitcases full of loot. The woman wants to beat the kid into acquiescing but the man tries to cozy up to him for a week first. The boy knows that they are evil doers so he denies being able to enter dreams. On one of the days before the week is up, the man gives the kid a quarter. At the end of the week the boy still hasn't agreed to transport his greedy foster parents into a dream land filled with wealth, so they get violent with him. He agrees to try when he falls asleep. It works, but the three find themselves within a dark cave with no treasure in sight. The boy hears his name and wakes up. A neighborhood friend had come by and called out for him. He wonders where the foster parents are and the kid tells him that he had used the quarter the man gave him to buy...this issue, where the cruel couple met their fate by encountering the beast depicted on the cover.

A vampire takes a job as a night watchman with the condition that no one enter the premises at night. When his boss becomes too curious for his own good, he becomes just another victim and the vampire resigns himself to looking for another job.

An escaped convict runs into a tribe of tiny Indians and dies when a rattlesnake bites him while harassing the Indians.

Retrieved from "https://heykidscomics.fandom.com/wiki/House_of_Secrets_Vol_1_138?oldid=1434652"
Community content is available under CC-BY-SA unless otherwise noted.