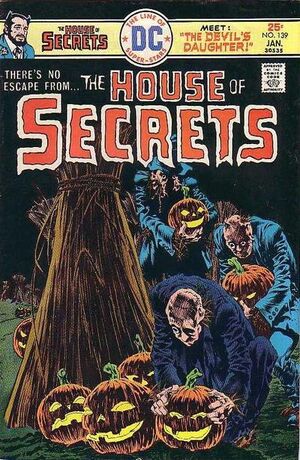 Appearing in "The Devil's Daughter"Edit

Synopsis for "The Devil's Daughter"Edit

When a stepfather hears his daughter talking to the circus ape Bobo and the beast replies, he becomes convinced that she's a witch. The man attempts to kill the girl but the ape breaks his neck. The authorities have some suspicions about the girl, but she convinces them her stepfather was mad by showing them a book about ventriloquism she said she had been reading. The sheriff tells her that they are going to have to put down the ape now that it's killed and she pleads for a chance to say goodbye. She tells Bobo that she's sorry they are going to kill him for helping her and walks away. Bobo pleads for his life, but she refuses to tell the sheriff the truth as she doesn't want anyone to learn that she actually is a witch.

Appearing in "A Real Crazy Kid"Edit

Synopsis for "A Real Crazy Kid"Edit

A ladies man meets a girl on the street who acts crazy and is intrigued by the potential challenge of getting her to fall in love with him. When he first sees her she is peeling two bananas without paying for them. He approaches her and she pushes the bananas into her ears telling him that she can't hear him because she's gone bananas. He pays the angry grocer and takes the girl to a restaurant. She tells him that the place has been bugged by the feds and after she swats a fly she tells him that he can speak freely. He figures that she has set up this wall of stupid puns to keep others at a distance, so he takes her for a drive in his car and asks her to tell him about herself. She replies that she is a witch. He says that he knows that she isn't a witch and she is just leading up to another stupid pun. She insists that she is a witch. He says ok turn me into something then. She grabs the steering wheel and propels the two of them directly into a telephone pole.

An archeologist gets more than he bargains for when he ingests the substance that will transform him into the native's ancient god. He wanted the god's power but he gets the god's loathsome appearance as well.

Retrieved from "https://heykidscomics.fandom.com/wiki/House_of_Secrets_Vol_1_139?oldid=1434653"
Community content is available under CC-BY-SA unless otherwise noted.