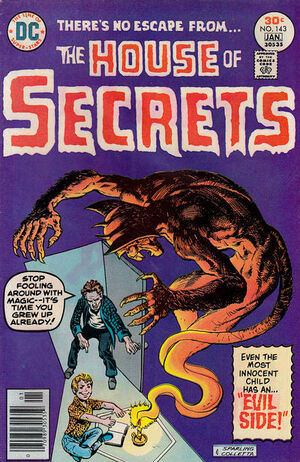 A baron burns a woman as a witch because he wishes to annex her land. He gives her orphan boy to a vassal of his. When the man discovers that his adopted son can shape-shift he realizes that his mother really was a witch. The boy learns that the baron had burned his mother so he changes into a hawk and claws the baron's eyes. When the boy returns home, the father kills him with a crossbow bolt as he is worried that his power is supplied by Satan and will result in his soul being damned.

This is a story with no text that looks like it is telling the story of Frankenstein, except that the last panel features Pinocchio.

Appearing in "The Evil Side"Edit

Synopsis for "The Evil Side"Edit

A boy sorcerer resents his uncle for attempting to discourage him from following his evil inclinations and when the man's brother visits and mentions the powerful items kept in the attic, the boy waits until his uncle has gone to sleep before exploring the attic. He finds a magic carpet and a spell book that he uses to summon a demon so that his uncle will be killed and he'll be free of his smothering influence. The uncle wakes and realizes something is wrong so he goes to the attic and sees the boy riding his carpet. The demon appears and grips the old man around the neck while the boy laughs. The old man attempts to warn the boy that the carpet's magic is attuned to his life, but the boy doesn't listen and flies through the night. When the demon kills the old man, the boy plummets to his death.

Retrieved from "https://heykidscomics.fandom.com/wiki/House_of_Secrets_Vol_1_143?oldid=1434657"
Community content is available under CC-BY-SA unless otherwise noted.