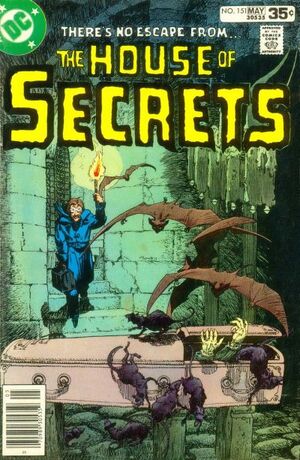 Appearing in "Love Me... Love My Demon!"Edit

Synopsis for "Love Me... Love My Demon!"Edit

A marsh-demon befriends a kid in an orphanage. When the aunt and uncle come for the boy, the marsh-demon exchanges appearances with him and tells him to hide in the closet. The adults take the marsh-demon back with them to their house.

Appearing in "Death Has Baby-Blue Eyes"Edit

Synopsis for "Death Has Baby-Blue Eyes"Edit

A three-month old child observes his parent's murder. The killer approaches the crib and gets a good look at the child and the elephant necklace he wears. The killer leaves the kid alone as he thinks there's no way the kid could act as a witness against him. The years pass, and the child grows up to be a police officer. His parent's killer is still up to his criminal ways and the two run into each other after someone calls in a crime. After an exchange of gunfire, the killer falls to his death off a fire escape. The irony in the story is, as he lays dying, the officer's elephant chain reminds him of a past event years ago and he recognizes the officer. The officer doesn't recognize the dead man as his parent's killer.

Dracula has a recurring daymare about being staked.

Retrieved from "https://heykidscomics.fandom.com/wiki/House_of_Secrets_Vol_1_151?oldid=1434665"
Community content is available under CC-BY-SA unless otherwise noted.