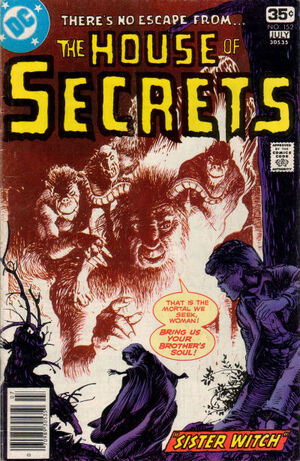 A boy is picked up at the orphanage by his sister only to learn that he is to be sacrificed in a Satanic ritual.

A doctor thinks that he can use an ape's imitative qualities to murder his wife and get away with it as he suspects her and his assistant of being lovers. The assistant complains when the doctor leaves his trained ape uncaged while they operate on other primates, but the doctor tells the assistant if he doesn't like it than he can leave. Eventually the doctor accuses the assistant and the assistant admits he loves the doctor's wife but they are not having an affair. The doctor fires the assistant but before he leaves the assistant sees the doll that the doctor trains the ape to act aggressively on and figures the assistant might be able to implicate him in his wife's murder. The doctor stabs the assistant to death and when the police question them the police are told they know of no one who could be considered an enemy of the dead man. After the police leave, the doctor's wife confronts him over the situation and he sends her to bed. He tells the ape that now is the time and sends it to the bedroom. The police unexpectedly return because the wife has phoned them intending to implicate her husband and the doctor threatens the police with a scalpel. The policemen hear the wife scream as the ape menaces her and strap the doctor to the operating table before rushing to her aid. When they burst into the bedroom, they shoot at the ape, who retreats out the window leaving the wife unmolested. The ape returns to the operating room and the doctor is glad to see it and tells it to release him as it has witnessed the procedure many times. The ape, however, is more curious to enact other behaviors it has witnessed many times as it grabs a scalpel and advances upon the helpless doctor.

Retrieved from "https://heykidscomics.fandom.com/wiki/House_of_Secrets_Vol_1_152?oldid=1434666"
Community content is available under CC-BY-SA unless otherwise noted.