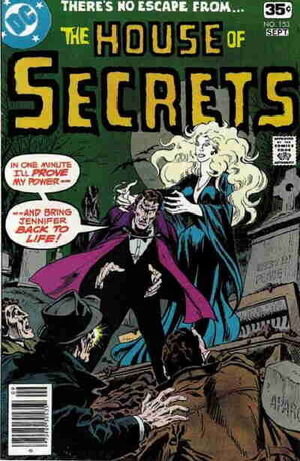 Appearing in "The Resurrection Business!"Edit

Synopsis for "The Resurrection Business!"Edit

A man who revives the dead for money is strangled by the ungrateful dead.

A man leads an expedition that ends in disaster to a Greek island rumored to be the home of shape-shifting blood suckers called Cypors. They locate the Cypor cave but all except three all killed retreating from the cave. Explosives are used accidentally to seal the cave and the man who lead the expedition is bitter after returning home with no proof that Cypors exist. He begins to suspect that his wife really died in the cave and that a Cypor took her place so he follows her one evening and sees her feed off a pedestrian. He calls the other man who came back from the expedition and they shoot her. She laughs as she dies because she turns back into his wife and knows that he will get the blame for the murder. The other man has a surprise for him too as it reveals it is a Cypor as well. The shock proves too much for the expedition leader and he goes insane.

Retrieved from "https://heykidscomics.fandom.com/wiki/House_of_Secrets_Vol_1_153?oldid=1434667"
Community content is available under CC-BY-SA unless otherwise noted.