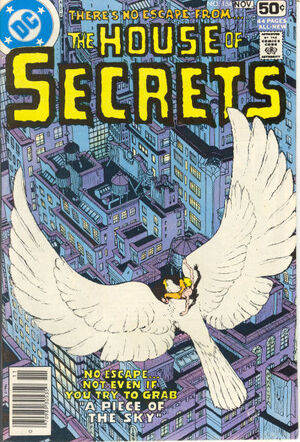 Appearing in "To Master a Mummy!"Edit

Synopsis for "To Master a Mummy!"Edit

An Egyptologist uses a cat's eye ring to control a mummy which he sends after a man that he believes is his wife's lover. She confronts him about it and he thinks that he will have to use the mummy to murder her as well. A bum steals the ring from him, so now the bum can control the mummy and it kills the Egyptologist. The bum kicks at a cat who has been following him around, and since the mummy was a worshiper of cats, it kills the bum. It takes the ring from the bum, picks up the cat and places the ring on its paw.

Appearing in "The Smartest Plant in the World!"Edit

Synopsis for "The Smartest Plant in the World!"Edit

A professor develops a meat-eating plant that begins eating dog food but as it grows larger, needs larger animals to sustain its growth. First he feeds it frogs, then moves on to gerbils. The plant has developed a means of communication by color change and the professor is excited when he hears it making a particular noise he assumes means the plant is hungry. He reaches into the gerbil cage to find a plump one, but he gets bit, and the other gerbils escape. The gerbils begin to attack as a group, so the professor backs up into the plant. The plant can sense fear in its prey so it holds the professor immobile while the gerbils attack and he ends up being devoured.

Appearing in "A Piece of the Sky"Edit

Synopsis for "A Piece of the Sky"Edit

A boy with his father goes out to check on his still and sees a falling star. It comes right at them and wrecks the still. It turns out to be an egg which hatches a large bird which the father dubs Brother Ugly. The father is wary of the creature but the boy tells him the bird is communicating with him and it is confused. The father and boy bring the bird back to their home and the father mentions to his wife he is concerned that with his still smashed the bank will foreclose on them. He asks the boy if he thinks that Brother Ugly could scout out for the boy's grandfather's still that the father never found. Brother Ugly agrees but he wants the boy to go with him. The parents reluctantly agree and the boy joyfully soars through the air on Brother Ugly's back. They locate the still and return. The boy wants Brother Ugly to stay with him, but his mother tells him that he's too big to fit in the house and will have to stay in the barn. The boy pitches some hay down for Brother Ugly to make a nest, but the bird overturns a lantern and a fire breaks out. The boy escapes the barn, but Brother Ugly is consumed in the flames. Brother Ugly becomes a Phoenix, and returns to the sky to become a star. The boy has been relating a story of events which took place sixty years ago, and now as an old man, he's comforted when he looks at the sky and knows that he's got a friend up there.

Appearing in "The Knight in a Gilded Cage!"Edit

Synopsis for "The Knight in a Gilded Cage!"Edit

An envious squire stabs his knight in the back because he knows that no one has ever seen his features and he plans to don the armor and take his place. The dying knight curses him and the following day the armor acts of its own accord to strike a fellow knight and initiate a death dual. The squire is helpless to resist as the joust begins and his chest plate opens up as his opponent strikes with his lance.

Retrieved from "https://heykidscomics.fandom.com/wiki/House_of_Secrets_Vol_1_154?oldid=1434668"
Community content is available under CC-BY-SA unless otherwise noted.