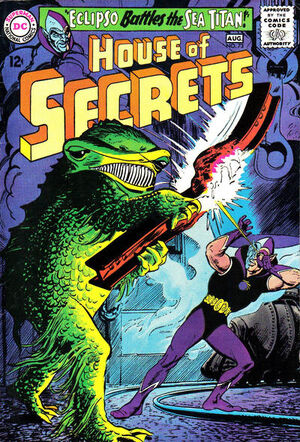 Appearing in "The Death of Mark Merlin"Edit

Synopsis for "The Death of Mark Merlin"Edit

Mark Merlin is ambushed at home by an old enemy, the Gargoyle, who shrinks him into another dimensional realm know as "Ra". There, he meets the sorcerer Kranak and his daughter Rimah.

Wanting to return to Earth, Merlin absorbs the rays of a potion provided by Kranak, knowing that his body would die. However, his memories would be reincarnated as "Prince Ra-Man," a young Egyptian sun-god who died accidentally years ago. Successfully, he returns to Earth, but with the body of another, and the memories of Merlin. As Ra-Man, he rescues Elsa from the Gargoyle.

Later, he explains the whole transformation thing to Elsa, telling her that Mark Merlin is dead and that he was his friend, contacted by occult means to come and save her.

Retrieved from "https://heykidscomics.fandom.com/wiki/House_of_Secrets_Vol_1_73?oldid=1434587"
Community content is available under CC-BY-SA unless otherwise noted.