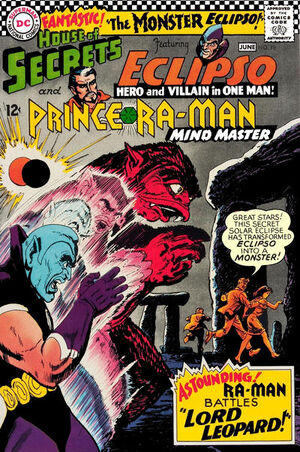 Playboy Whitney Hargrave challenges Prince Ra-Man to a duel of occult powers. He becomes embarrassed when Ra-Man exposes him as a charlatan. Angered by this, Hargrave orders his assistant Jambo to help him summon the supernatural Lord Leopard. When the creature arrives, his mighty mental powers make Hargrave his servant.

Jambo warns Ra-Man about Lord Leopard, but Ra-Man finds the demon's mental powers to be equal to his own. Elsa falls into Lord Leopard's hypnotic trance too. Ra-Man then uses the cat charm to exchange bodies with Memakata. He locates Hargrave and forces the playboy to say the magic words that will banish Lord Leopard. Elsa, Hargrave, and Lord Leopard's other victims are then freed from their trances.

Eclipso is again released from the body of Bruce Gordon. The villain makes his way to London where another eclipse is soon scheduled to occur. Bruce Gordon and the Bennett's follow Eclipso, but they don't reach him before the eclipse. Eclipso believes the second eclipse will allow him to remain permanently separated from Gordon, but instead it transforms him into a monster.

Though Gordon tries to use light bursts to stop the monster, they prove ineffective against Eclipso's new form. The villain then visits Stonehenge to uncover a hidden treasure. Eclipso succeeds in finding the treasure, which is a buried meteorite. The radiation from the meteorite return Eclipso to his normal form, then Gordon uses a light burst to return Eclipso to his own body.

Retrieved from "https://heykidscomics.fandom.com/wiki/House_of_Secrets_Vol_1_78?oldid=1434592"
Community content is available under CC-BY-SA unless otherwise noted.