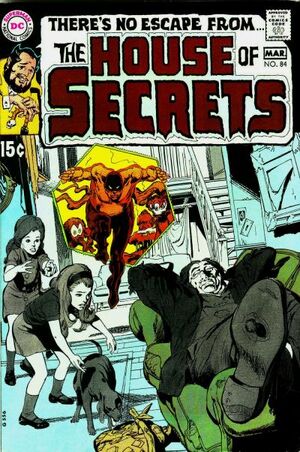 Appearing in "If I Had But World Enough And Time"Edit

Synopsis for "If I Had But World Enough And Time"Edit

A man watches TV so much that he finds himself transported into the shows he views.

Appearing in "Double Or Nothing!"Edit

Synopsis for "Double Or Nothing!"Edit

A sorcerer gives a crooked gambler his just desserts when he shrinks him into one of his loaded dice.

Appearing in "The Unbelievable! The Unexplained!"Edit

Synopsis for "The Unbelievable! The Unexplained!"Edit

A woman gets her unresponsive uncle sent to a nursing home where he dies of a stroke after two days. While searching for the deed to the house she comes across a key which seems to lead her across the grounds until she comes upon a door. She opens the door and whatever is inside causes her to scream so hard she is moved backward by the force of her own scream and the door shuts. She makes her way back to her uncle's house as in a trance and sits down in the chair that he used to occupy as unresponsive as he ever was.

Appearing in "If I Should Die Before I Wake"Edit

Synopsis for "If I Should Die Before I Wake"Edit

When a man dreams he visits a place called Somnia whose leader Morlon wants him to remain in Somnia permanently. The man tries to stay awake but when he visits an analyst and lies down on the couch he instantly falls asleep and the doctor reveals himself as the gloating Morlon.

Retrieved from "https://heykidscomics.fandom.com/wiki/House_of_Secrets_Vol_1_84?oldid=1434598"
Community content is available under CC-BY-SA unless otherwise noted.