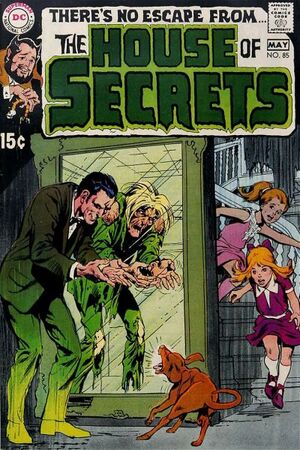 Appearing in "People Who Live In Glass Houses"Edit

Synopsis for "People Who Live In Glass Houses"Edit

A sorcerer acquires a magic mirror that he can enter once a year, and standing before it on the inside, it absorbs a year's worth of time. The man is 100 years ago, but possessed of the body of a younger man. Three boys come across the mirror and stumble into it, interrupting him. He threatens to lock them away inside the mirror so that they can tell no one his secret, but one of the boys snatches his magic stone and they escape into the physical world. The sorcerer pursues them and is in transition from the mirror into the physical world when the boy hurls the rock, shattering the mirror, trapping the sorcerer in the scattered fragments.

Synopsis for "House of Wacks"Edit

Abel tells a story with two endings about a hero who travels to Stonehenge to battle an evil wizard powered with a star gem. When he arrives at Stonehenge a warlock intercepts him and the hero explains what he is doing there and the warlock offers to battle the evil wizard with spells. The hero offers the warlock his sword and stands on the sidelines as the warlock defeats the evil wizard. Abel wonders what would have happened if the hero had used his sword against the evil wizard and tells this version of the story. The hero confronts the wizard but the wizard uses a spell to dissolve his sword. The hero then challenges the wizard to a fight with bare strength and the wizard laughs and reveals that he is the hero's father after the hero has pushed him to his death in a hell pit. The hero wonders what turned his father evil and he realizes that the star gem is too much of a temptation...even for a man like him.

Retrieved from "https://heykidscomics.fandom.com/wiki/House_of_Secrets_Vol_1_85?oldid=1434599"
Community content is available under CC-BY-SA unless otherwise noted.