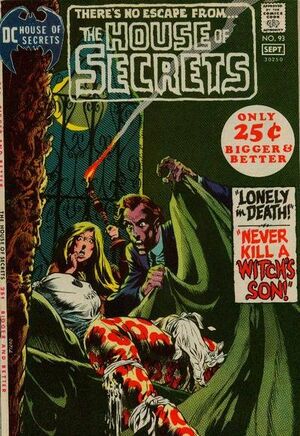 Appearing in "Lonely in Death!"Edit

Synopsis for "Lonely in Death!"Edit

At first circumstances in an old house lead a young woman to believe her recently deceased mother is attempting to kill her in order to have company in the afterlife, but then the resentful brother is revealed as the cause of the near fatal mishaps. He attempts to stab his sister with a spear, but falls out a window to his death when startled by something the woman takes to be her mother's ghost protecting her, not attempting to kill her as she mistakenly previously believed.

Appearing in "The Curse of the Cat's Cradle"Edit

Synopsis for "The Curse of the Cat's Cradle"Edit

reprinted from My Greatest Adventure Vol 1 85

A man being paid to sabotage a construction project has a nightmare about falling into a dark area and then being seized by a giant hand. After he wakes up and heads to the construction site he finds that his nightmare was a premonition.

Appearing in "The Beast From The Box"Edit

Synopsis for "The Beast From The Box"Edit

reprinted from House of Secrets Vol 1 24

A niece and her husband plot to kill her uncle for insurance money, but since the uncle's mother fancies herself a witch, the husband hatches a scheme to drive his wife to suicide so that he can get all the money. He fakes the uncle's appearances after they push him to his death off the balcony claiming that he had a fainting spell, but does too good a job and while his wife has been sedated, she sees her husband at the balcony and mistakes him for her uncle and shoves him to his death. All this time, the uncle's mother has been tending her son's grave, believing herself to be responsible through black magic for what happens to the niece and her husband.

Retrieved from "https://heykidscomics.fandom.com/wiki/House_of_Secrets_Vol_1_93?oldid=1434607"
Community content is available under CC-BY-SA unless otherwise noted.