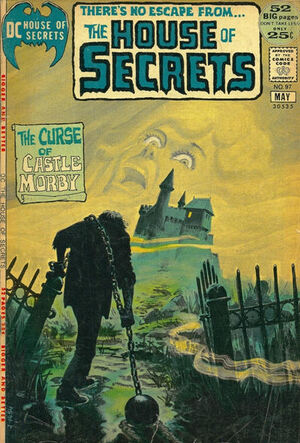 Appearing in "The Curse of Morby Castle"Edit

Synopsis for "The Curse of Morby Castle"Edit

A man unknowningly hires a ghost to frighten his new wealthy bride to death, but the spirit wishes for company and so frames the man by poisoning the wife knowing the police will arrest him for murder and he will eventually be executed and return to her haunted castle as a fellow ghost.

Appearing in "Divide and Murder"Edit

Synopsis for "Divide and Murder"Edit

A man uses black magic to have his astral form leave his body and strangle his boss. The boss' ghost appears to him and tells him that evidence against him can be found in his safe. The killer assumes his astral form once more to go to the safe and check it, but there is nothing there. He returns to his physical body only to find it in jail. The dead man's ghost appears to him once more and tells him that while his astral form was distracted he possessed the physical body and made a full confession to the police.

Appearing in "The Day After Doomsday"Edit

Synopsis for "The Day After Doomsday"Edit

The last man and woman discover a flower growing among the ruins...and then the building collapses upon them.

Appearing in "Domain of the Damned!"Edit

Synopsis for "Domain of the Damned!"Edit

A man is saved from being sacrificed to the tribe of deformed native's volcano god by the chief's daughter who takes a fancy to him. The chief exiles both of them and tells them that if they return, they will be sacrificed to the volcano god. The girl tells them that they can make a raft and leave the island from the opposite side of the island, but the man rejects her. She begs him to take her with him but he asks her what would he do with a freak like her? Having nowhere left to go, she returns to her tribe and they sacrifice her to the volcano god. In order to get to the opposite side of the island, the man must cross the volcano, and it erupts when he does. He manages to get to the beach, board a raft and be picked up sailors, but he has been so hideously burned by the lava that he is unaware he appears even more freakish than the native islanders.

Appearing in "The Tomb of Ramfis"Edit

Synopsis for "The Tomb of Ramfis"Edit

reprinted from House of Mystery Vol 1 59

reprinted from House of Mystery Vol 1 46

Retrieved from "https://heykidscomics.fandom.com/wiki/House_of_Secrets_Vol_1_97?oldid=1434611"
Community content is available under CC-BY-SA unless otherwise noted.