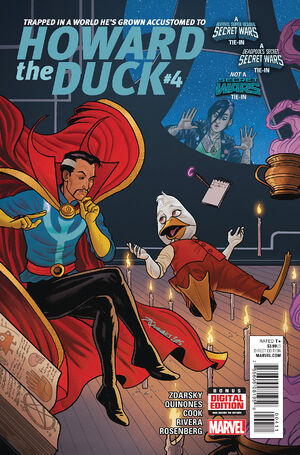 Appearing in "Dr. Stranger in a Dr. Strange Land"Edit

• Looks like the "doctor is in" ... this issue of HOWARD THE DUCK! Ha ha of course I'm referring to Dr. Strange, Sorcerer Supreme.

• I'm 100% positive nobody's ever made that joke before, so I feel pretty confident doing so here.

• There will be other jokes of a similar nature in this issue.

Appearing in "Logic and Proportion"Edit

Synopsis for "Logic and Proportion"Edit

Retrieved from "https://heykidscomics.fandom.com/wiki/Howard_the_Duck_Vol_5_4?oldid=1642152"
Community content is available under CC-BY-SA unless otherwise noted.