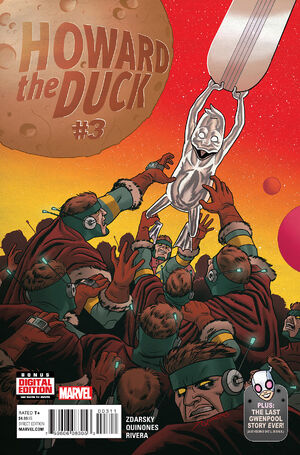 Every night when I go to sleep I... I think about the prisoners I left behind on that planet. Yeah, I want to go home. But if I have a chance to... if I don't help these two make it right, I... what kind of duck would I be?

• The entire universe is after Howard! Is it because he’s very handsome? Charming? Yes!

• Howard is actually very difficult to be around sometimes. Also, it’s hard to tell if he’s handsome since he’s a duck.

• Join Chip & Joe for … DUCK HUNT! The storyline created just so we could use that title!

• Plus the conclusion of the Howard/Gwenpool backup!

Appearing in "Ms. Poole if You're Nasty (Part Three of Three)"Edit

Synopsis for "Ms. Poole if You're Nasty (Part Three of Three)"Edit

Retrieved from "https://heykidscomics.fandom.com/wiki/Howard_the_Duck_Vol_6_3?oldid=1749827"
Community content is available under CC-BY-SA unless otherwise noted.