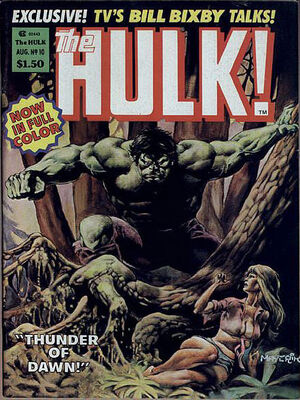 Appearing in "Thunder of Dawn"Edit

Synopsis for "Thunder of Dawn"Edit

In the wilderness the Hulk goes on a rampage attacking the beauty of the land as he is angered over his hideousness. After his rampage, the Hulk changes back to Bruce Banner and passes out, when he wakes up he is found by Dawn Michaels. Dawn takes Bruce in and helps him get a job at the Wolman Mines where she works.

Bruce ends up stumbling on a secret at the mines: Dawn is really a reporter who has been trying to expose the fact that the owners of the mine have been involved in illegal operations and selling radioactive materials to shady sources. When Dawn is killed for what she has found out, they also seal Bruce in the mine and make their escape. Bruce transforms into the Hulk and smashes the operation, and killing the masterminds behind it in the process.

Appearing in "The Runaway and the Rescuer!"Edit

Synopsis for "The Runaway and the Rescuer!"Edit

Text story... The Hulk is bounding through a city where he happens upon a little girl who has run away from home. The Hulk talks her into going back home and makes his escape when the police and the military who believe that he intends to harm the girl.

Retrieved from "https://heykidscomics.fandom.com/wiki/Hulk!_Vol_1_10?oldid=1432820"
Community content is available under CC-BY-SA unless otherwise noted.