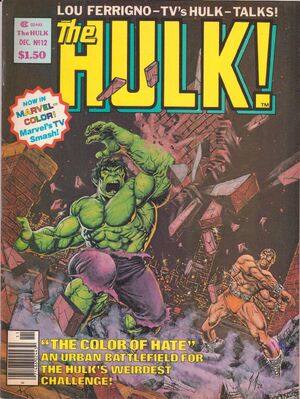 Appearing in "The Color of Hate!"Edit

Synopsis for "The Color of Hate!"Edit

Bruno the Strongman of the Torrance Traveling Circus is still furious about being beaten by the Hulk (last issue), and reads about an experiment being conducted in Chicago where a scientist is looking for a person to partake in his strength enhancing process.

Coincidentally, the Hulk arrives in Chicago and after initially rampaging through the south end of Chicago, he reverts back to Bruce Banner. He's taken in by an African-American man who tells him of the troubles in southern Chicago and the racial tension in the area.

Meanwhile, Bruno has forced his way into being the candidate of the doctors experiments. While in southern Chicago, the man tries to smuggle Bruce out of the area under the cover of night. When they are hassled by a gang of hoods, Bruce turns into the Hulk, easily scaring them off and bounding away.

When the Hulk ends up at Cubs stadium, Bruno goes after him and the two duke it out in the middle of the ball field. The Hulk's strength proves superior, and he knocks the armor off of the strong man. However, the battle exhausts the Hulk enough to cause him to revert ack into Bruce Banner. Bruno revives and is about to beat Banner senseless when the police arrive and are forced to gun him down.

An interview with Lou Ferrigno, the actor who play the Hulk in the 1978 Incredible Hulk television series.

Appearing in "Embassy of Fear!"Edit

Synopsis for "Embassy of Fear!"Edit

Continued from last issue... Moon Knight rescues Marlene from Fenton Crane, and the two learn the mastermind behind the plot: Alphonse Leroux, the ambassador of Chile. Moon Knight, decides to try and purchased the stolen statue from Leroux in his Steve Grant identity.

Getting into a party at the embassy as Steve Grant, Moon Knight asks Leroux about the statue and his interest in purchasing it. Returning later as Moon Knight to snoop around before his midnight purchase rendezvous with Leroux. Moon Knight learns that Leroux intends to double cross and murder Steve Grant upon his arrival. He then breaks up Leroux's hired thugs, before disappearing and quickly changing into Steve Grant.

Arriving as Grant at midnight, he tells Leroux that he's protected by Moon Knight, who made sure that there was no double cross when the transaction was made.

Retrieved from "https://heykidscomics.fandom.com/wiki/Hulk!_Vol_1_12?oldid=1432822"
Community content is available under CC-BY-SA unless otherwise noted.