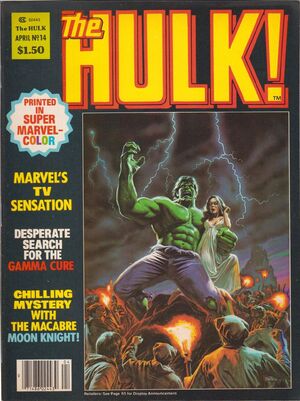 Appearing in "A Cure for Chaos!"Edit

Synopsis for "A Cure for Chaos!"Edit

Making it to Zurich, Switzerland, Bruce Banner seeks out the help of Nobel Prize winner Hans Feldstadt. Feldstadt has been working into research which could potentially cure Banner of being the Hulk for good. When Banner initially tries to see Feldstadt, who does not believe Banner and summons the police. The police try to show Banner away, causing him to change into the Hulk and go on a rampage.

When Banner is admitted in when Feldstadt realizes the truth, the people of the town attack Feldstadt's castle. During which his gamma ray device is destroyed bombarding Feldstadt with gamma rays turning him into a Hulk like creature. Banner turns into the Hulk and the two monsters fight each other. Feldstadt is killed in the battle and the Hulk flees the scene.

Appearing in "Countdown to Dark"Edit

Synopsis for "Countdown to Dark"Edit

Continued from last issue... Infiltrating a group of terrorists armed with a nuclear weapon, Marc Spector is shocked when they are stopped by somebody posing as Moon Knight. During the altercation, Marc and the Moon Knight imposer are seemingly slain. However, Marc survives and confirms what he suspected: He isn't losing his mind, the Moon Knight was an imposer. He dawns his own costume and chases after the terrorists.

Learning that the terrorists have set the bomb to explode, he sends Frenchie to get a bomb squad to defuse it as he chases after the terrorists. Led to Lupinar's base, Moon Knight faces Lupinar alone, learning of Lupinar's scheme and that if that even if the ransom to deactivate the bomb is paid, he still intends on detonating the bomb and burning the money.

In a sword fight, Moon Knight manages to hold his own, however when Lupinar jumps at him, Moon Knight is forced to impale Lupinar, seemingly killing him in the process. In the aftermath of everything, Frenchie manages to get the bomb squad to the bomb in time to defuse it, and after all is said and done, Moon Knight takes Marlene out in his Steve Grant persona.

Retrieved from "https://heykidscomics.fandom.com/wiki/Hulk!_Vol_1_14?oldid=1432824"
Community content is available under CC-BY-SA unless otherwise noted.