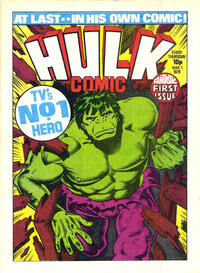 The Hulk is struck by lightning in an electrical storm which plunges a town into darkness, and his body somehow holds the charge until it is discharged into a pair of criminals who have been taking advantage of the power outage.

On a mission for Merlyn, the Black Knight is distracted by a near collision with a military helicopter carrying blood supplies to a hospital in Cornwall. Meanwhile, Mordred schemes against him...

Night Raven breaks up a meeting of underworld leaders with deadly force.

Retrieved from "https://heykidscomics.fandom.com/wiki/Hulk_Comic_(UK)_Vol_1_1?oldid=1746301"
Community content is available under CC-BY-SA unless otherwise noted.