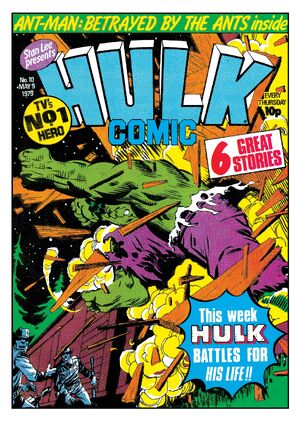 Banner finds himself a hunted man, and is then attacked by a bear while apparently unable to transform into the Hulk.

On their way to Otherworld, Captain Britain and Vortigen the Walker are attacked by a mob of innocent Cornish villagers under the mental control of Mordred.

Fury is alone in the desert at the mercy of an unsuspected enemy.

Also contains reprints of Ant Man and the Eternals.

Retrieved from "https://heykidscomics.fandom.com/wiki/Hulk_Comic_(UK)_Vol_1_10?oldid=1746304"
Community content is available under CC-BY-SA unless otherwise noted.