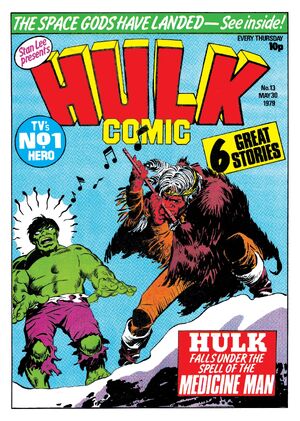 The Hulk battles Susquatch, until the intervention of the mysterious Passing Cloud who soothes both beasts with his flute...

The mystery of Vortigen continues to unfold as the Black Knight has to deal with the destruction of his Ebony Blade.

Scoop Daly is caught between Night Raven and a gang of vicious criminals.

This issue also contains reprints of the Eternals and Ant Man.

Retrieved from "https://heykidscomics.fandom.com/wiki/Hulk_Comic_(UK)_Vol_1_13?oldid=1730530"
Community content is available under CC-BY-SA unless otherwise noted.