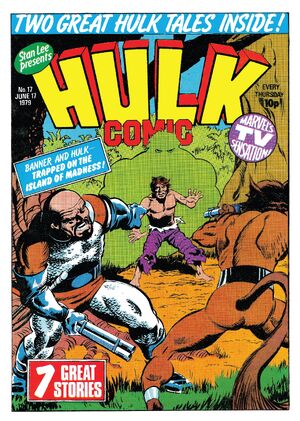 Vortigen fights to save Moondog from the Dark Walker.

Fury finds himself partnered with a female SHIELD agent in Hong Kong, where the Sept's main cell is apparently located.

Yi Yang orders the death of Night Raven, as the vigilante continues his battle with Dragonfire.

Also contains reprints of Ant Man, the Eternals and What If?

Retrieved from "https://heykidscomics.fandom.com/wiki/Hulk_Comic_(UK)_Vol_1_17?oldid=1730534"
Community content is available under CC-BY-SA unless otherwise noted.