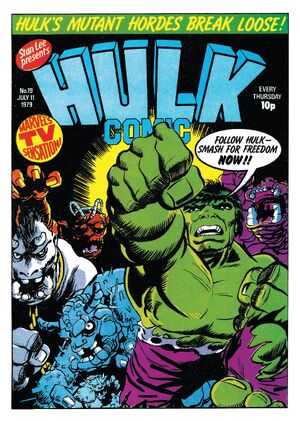 The Hulk recruits Scarabeus's monsters to use against the Monster Maker himself!

Moondog and the Knight face the menace of Cormac, but the Knight severs the villain's right hand with Excalibur.

Nick and Annie destroy the Yellow Claw's computer complex and his android Bronze Men, but the Claw escapes seeming destruction yet again.

Retrieved from "https://heykidscomics.fandom.com/wiki/Hulk_Comic_(UK)_Vol_1_19?oldid=1775289"
Community content is available under CC-BY-SA unless otherwise noted.