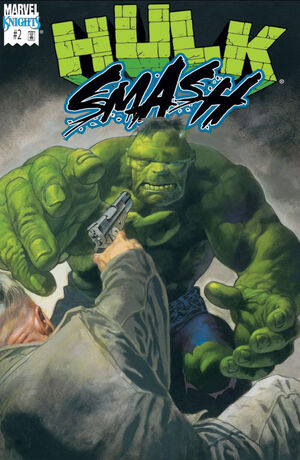 Lt. Patrick D. Mitchell and Major Lucas Parker are on a high bluff overtop the battle scene, where army men are engaging the Hulk. Parker suspects that Mitchell has abandoned his unit and needles him until Mitchell confesses to his cowardly behavior.

They set a plan on attacking the Hulk. They wait until the dust settles a bit and bait the Hulk into lumbering underneath a bluff. They set grenades in a crevice and detonate them causing the entire hillside to fall down upon the Hulk. Parker isn't able to jump from the falling side of the cliff to safety in time and dies in the explosion. The plan proves pointless, as the falling rock does nothing to the Hulk.

Mitchell gears himself for what may be his final battle. Mustering his courage, he regroups with his men and plans for the next attack against the Hulk. This too, results in nothing more than aggravating the Hulk beyond measure. Steeling himself, Mitchell approaches the Hulk directly. He has regained his courage and he points a service revolver directly at the Hulk. He knows that it won't work, but the Hulk is so impressed that this "puny human" is willing to die for the sake of his men, that he turns away and leaves him alone.

Retrieved from "https://heykidscomics.fandom.com/wiki/Hulk_Smash_Vol_1_2?oldid=1432737"
Community content is available under CC-BY-SA unless otherwise noted.