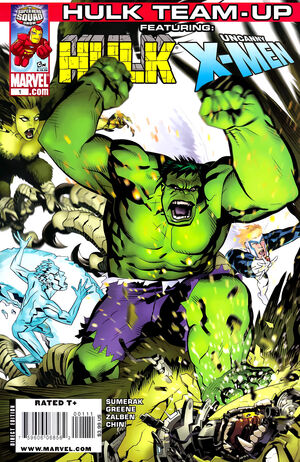 Mutant mayhem in a Battle by the Bay! While exploring their new home in San Francisco, X-Men Iceman and Angel discover that the weirdest part of the city isn't its eclectic populace or crazy landmarks, but the monsters that pass through -- namely the Incredible Hulk! Now they've got to track down Hulk and get to the bottom of a series of earthquakes (because THAT never happens in SF...) before the Red Hulk shows up bringing his trademark good cheer to San Fran. Did we say good cheer? We meant destruction and carnage. PLUS: Dazzler rocks out at the Fillmore and Hulk's got backstage passes! Will the Pop Princess get Smashed, live in concert?

Retrieved from "https://heykidscomics.fandom.com/wiki/Hulk_Team-Up_Vol_1_1?oldid=1728190"
Community content is available under CC-BY-SA unless otherwise noted.