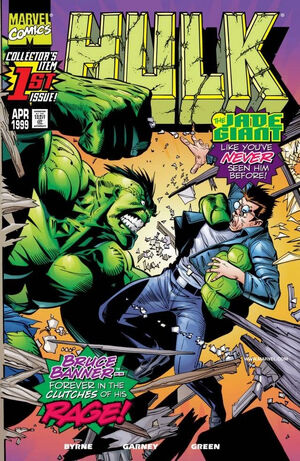 To think--there have been times, moments in the past few years when I've almost thought there might be a chance I could control the Hulk, harness that power for the good of all. Yet always, always the dream dies, the madness comes back. And each time, it seems worse than before.

Appearing in "The Gathering Storm"Edit

Synopsis for "The Gathering Storm"Edit

Emma Tolliver is sitting at home, when she hears the wail of Tornado sirens begins as her Dad, Jonas Tolliver bursts in and picks up her daughter. He rushes her to the storm celler as a truck crashes into the roof of the house, all the while calling for Bruce.She runs off and the Truck explodes in front of Emma

Cut to a few days prior and Bruce Banner is on a bus travelling to Kansas city when he decides to stay at the town they've stopped in. Taking residence in the house of house of an old lady, he dreams of the Hulk destroying the town and wakes up to find the town has in fact been destroyed by the Hulk. Feeling guilty he helps the clean up effort along with FEMA and the Sheriff Jonas offers to give him a room for time being for his hard work. While the Sheriff goes into town Bruce looks after Emma but begins to feel funny and passes out. As Jonas meets with FEMA they detect a Gamma signal originating from Jonas' house.

Cut back to present day we find Emma is all right and on the other side of a fire wall, her dad tells her to go and find protection from the fire. She rushes to the barn to rescue the horses, just as the Hulk crashes through the roof of the barn.

Appearing in "Everything you ever wanted to know about the Hulk (But were afraid to ask!)"Edit

Synopsis for "Everything you ever wanted to know about the Hulk (But were afraid to ask!)"Edit

Retrieved from "https://heykidscomics.fandom.com/wiki/Hulk_Vol_1_1?oldid=1432739"
Community content is available under CC-BY-SA unless otherwise noted.