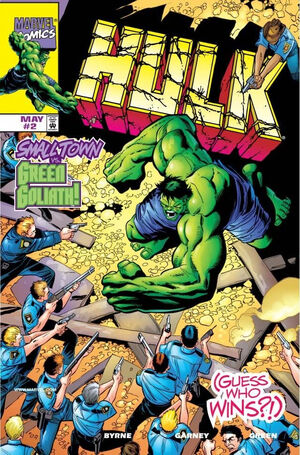 Appearing in "Holocaust in the Heartland!"Edit

Synopsis for "Holocaust in the Heartland!"Edit

Our story begins just as the Hulk has transformed. In a blind rage he begins destroying the farms surrounding the town of Faulkner. Hitting the highway, he stops a truck and hurls it at the house of Jonas Tolliver from last ish. Terrorising the driver for a bit and about to kill him the hulk leaves to investigate the exploding truck.

Jonas shields his daughter from the Hulk, and even though he knows its futile he considers shooting the Hulk, then considers shooting Emma to protect from the pain the Hulk could inflict. As the Hulk raises his arm to crush both of them, he finds his arm locked in place and unable to fell the killing blow. This makes the Hulk madder and madder and thus less and leess able to move his arm. The Change then suddenly overcomes the Hulk an the form of Bruce Banner is left with Jonas pointing his Gun at him.

Retrieved from "https://heykidscomics.fandom.com/wiki/Hulk_Vol_1_2?oldid=1432740"
Community content is available under CC-BY-SA unless otherwise noted.