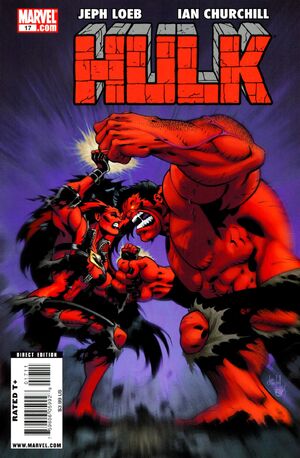 Appearing in "The Man in The Mirror"Edit

Superstars JEPH LOEB and IAN CHURCHILL bring you the final chapter of CODE RED. Is RED HULK strong enough to throw down with WOLVERINE, PUNISHER, DEADPOOL, the all-new RED SHE-HULK, and more? Find out, as new secrets are revealed as the stage is set for WORLD WAR HULKS.

Retrieved from "https://heykidscomics.fandom.com/wiki/Hulk_Vol_2_17?oldid=1649437"
Community content is available under CC-BY-SA unless otherwise noted.