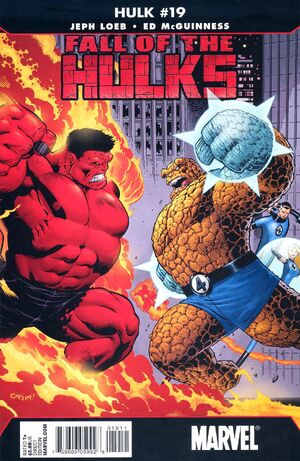 This is it! The Fall of The Hulks begins here. The opening round: THE RED HULK VS. THE THING with Reed Richards' life at stake. When the Baxter Building is attacked by the all-new, all-deadly Frightful Four, who will save the Fantastic Four? How about THE RED HULK? Not a chance. The superstar team of JEPH LOEB and ED McGUINNESS shotgun this mindblowing chapter of the biggest Hulkventure of them all.

Retrieved from "https://heykidscomics.fandom.com/wiki/Hulk_Vol_2_19?oldid=1750315"
Community content is available under CC-BY-SA unless otherwise noted.