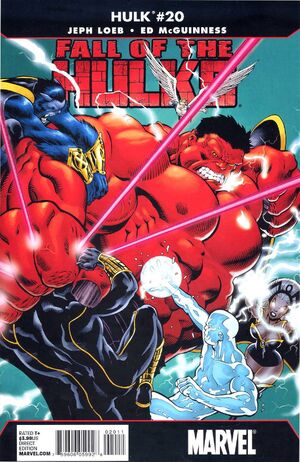 Appearing in "Man Nor Beast"Edit

FALL OF THE HULKS continues! He’s smashing his way through the heroes of the Marvel Universe with a rage unstoppable. Next up? THE RED HULK vs. THE UNCANNY X-MEN. And what do RED GHOST AND THE SUPER-APES want with Beast and The Black Panther? Superstars JEPH LOEB and ED McGUINNESS keep bringing the pain in the event of the century.

Retrieved from "https://heykidscomics.fandom.com/wiki/Hulk_Vol_2_20?oldid=1721859"
Community content is available under CC-BY-SA unless otherwise noted.