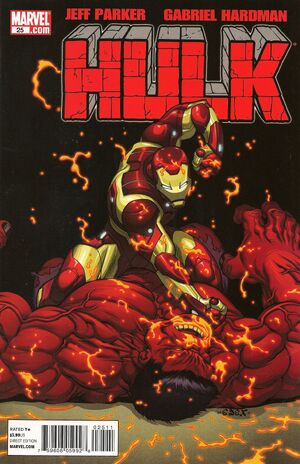 Take cover, here comes a rampaging engine of awesome force- and we're talking about our new creative team of Jeff Parker and Gabriel Hardman bringing RED HULK into a new age of sci-fi adventure! The score has been settled, Red Hulk has been beaten by the Incredible Hulk decisively. The war is over and Steve Rogers is on tap to give these explosive characters a sense of direction! Red Hulk heads out to deal with a deadly contingency plan left behind by Leader and MODOK, for once on the side of the angels. But IRON MAN didn't get the message...Plus, an extra 8-page backup featuring Rick Jones, the A-BOMB, by Jeff Parker and Mark Robinson.