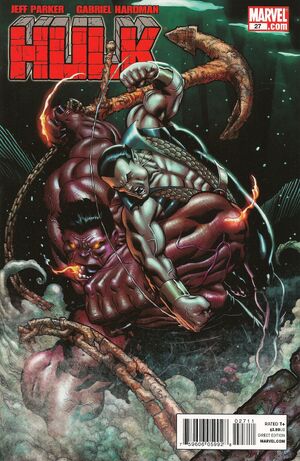 SCORCHED EARTH, PART III: The oceans will boil! Red goes into deeply unfamiliar territory to stop the next contingency, and the best ally for the mission is Namor, King of Atlantis! Take a dangerous doomsday scenario and insert two of the most powerful overbearing egos on Earth and... what could go wrong? MEANWHILE...in the Pacific, A-Bomb finds out where giant monsters go after they've been driven out, and finds...MORE giant monsters!!

Retrieved from "https://heykidscomics.fandom.com/wiki/Hulk_Vol_2_27?oldid=1651473"
Community content is available under CC-BY-SA unless otherwise noted.