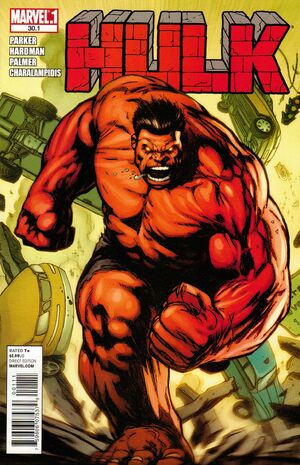 Your brain is full of micro-mines. Your defenses won't detect them. They took the bots most of the time to plant -- looks like you transformed after our first encounter, that threw them off course. We missed our best chance, but won't miss it again. I know the transformation readings now. Once you turn human again, I'll be able to melt down your brain. So, I wouldn't relax if I were you. And there won't be any of this sympathizing with your human side like there was with Banner. I say you're a monster, you're a monster full-time. Your days are numbered, Red Hulk. And General Fortean is the one counting down.

Special POINT ONE issue. START READING with this Point One issue. For years, General Thunderbolt Ross chased the Hulk across the planet, hoping to capture and defeat the Jade Giant. Now, Ross himself is a gamma-irradiated force of nature and a new enemy emerges to fill the general’s army boots. His name is Fortean. His mission: to enact vengeance on the beast that took the life of Thunderbolt Ross. Little does he know that the beast and the man are one and the same! Prepare for the birth of the next great Hulk villain!

Retrieved from "https://heykidscomics.fandom.com/wiki/Hulk_Vol_2_30.1?oldid=1432807"
Community content is available under CC-BY-SA unless otherwise noted.