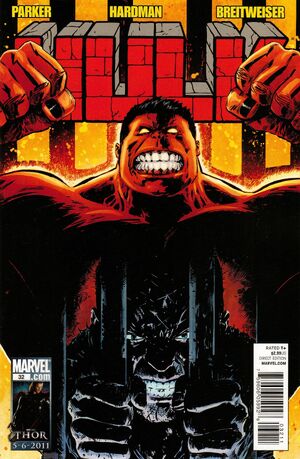 Your prime goal will be to hunt down this being and kill him. He and all threats to our program will be purged and deleted. There will be no defense against Black Fog.

Appearing in "The Rising Fog"Edit

The Red Hulk has nowhere to call home. He can't sleep or he'll run the risk of turning human…to be killed immediately by the formidable General Fortean. The Red Hulk needs time and answers; instead he gets another unstoppable hunter created by Zero/One just for him!

Retrieved from "https://heykidscomics.fandom.com/wiki/Hulk_Vol_2_32?oldid=1508061"
Community content is available under CC-BY-SA unless otherwise noted.