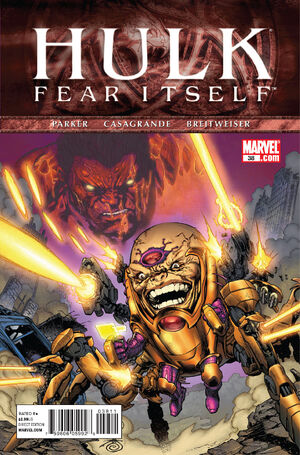 FEAR ITSELF TIE-IN Who will be left standing as two of Marvel’s Mightiest go head to head? Red Hulk’s big brawlin’ battle with the hammer-wielding Thing comes to its bone-bashing, fist-smashing, mind-crashing conclusion! It’s a fight like nothing ever seen before, and no one walks away unscathed! Even the all-new M.O.D.O.K. may learn a thing or two before it’s all over! Written by Hulk’s master penman Jeff Parker and drawn by the dynamic Elena Casagrande, this is an issue not to be missed!

Retrieved from "https://heykidscomics.fandom.com/wiki/Hulk_Vol_2_38?oldid=1649550"
Community content is available under CC-BY-SA unless otherwise noted.