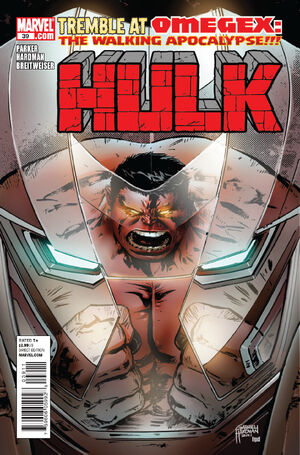 Omegex did not kill you. That is significant.

OMEGEX, a deadly force from beyond the far reaches of space, has awakened, and he wants Red Hulk! Our Crimson Crusader has fought battles of massive scale, fought villains of great strength and guile, and even punched a Watcher! But what can he do against a destroyer of entire worlds? Star scribe Jeff Parker and the astounding artisan Gabriel Hardman bring an epic Hulk tale in the grand Marvel tradition!

Retrieved from "https://heykidscomics.fandom.com/wiki/Hulk_Vol_2_39?oldid=1432788"
Community content is available under CC-BY-SA unless otherwise noted.