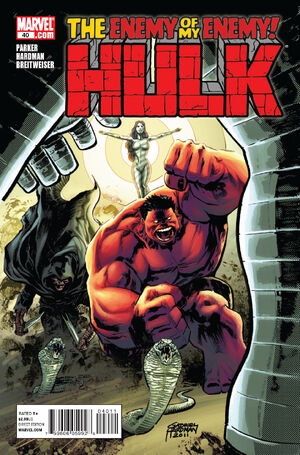 THE OMEGEX SAGA CONCLUDES! Apparently you really can’t go home again. The Red Hulk just wanted to visit his old homestead, but is now in the fight of his life against the mighty Omegex, the world destroyer! As Red Hulk is on the ropes and it seems as though things can’t get any worse, super-villainess extraordinaire Zero/One and her henchman Black Fog arrive. Rulk’s renowned writer Jeff Parker and all-star artist Gabriel Hardman bring a thrilling, action-packed conclusion to Red Hulk’s most dangerous dust-up yet!

Retrieved from "https://heykidscomics.fandom.com/wiki/Hulk_Vol_2_40?oldid=1508062"
Community content is available under CC-BY-SA unless otherwise noted.