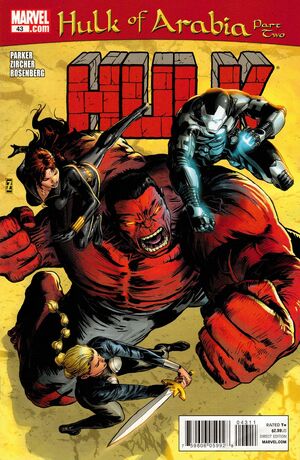 A ghost from General Ross’s past has resurfaced, embroiled in a dangerous war in the Middle East. Red Hulk goes off the grid on an unsanctioned mission that puts him at direct odds with the Secret Avengers and Steve Rogers, his super hero sponsor. Teaming up with Machine Man, Rulk sets out on a covert mission that may be the most dangerous of his life! Jeff Parker continues his lauded run, with stunning art by the incomparable Patrick Zircher. Don’t miss the beginning of the biggest Red Hulk story yet!

Retrieved from "https://heykidscomics.fandom.com/wiki/Hulk_Vol_2_43?oldid=1655338"
Community content is available under CC-BY-SA unless otherwise noted.