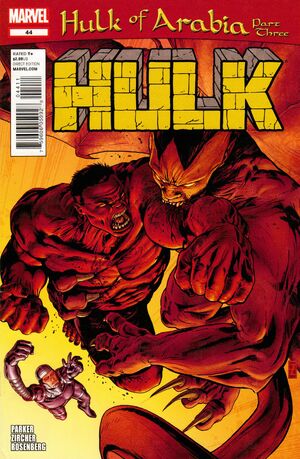 I am the man who built this empire. The man you wish to see. I am Dagan Shah. The Sultan Magus!

Appearing in "Hulk of Arabia Part 3: The Shifting Sands"Edit

General Ross, a.k.a. Red Hulk, proceeds with his unsanctioned mission to find the mysterious Dagan Shah, the man Rulk believes responsible for the death of a former friend. But as Red and his new ally Machine Man fight through ancient monsters and treacherous terrain, are their answers closer than they even imagined? Wondrous word-slinger Jeff Parker and master draftsman Patch Zircher forge one of the most highly anticipated Hulk stories yet!

Retrieved from "https://heykidscomics.fandom.com/wiki/Hulk_Vol_2_44?oldid=1432793"
Community content is available under CC-BY-SA unless otherwise noted.