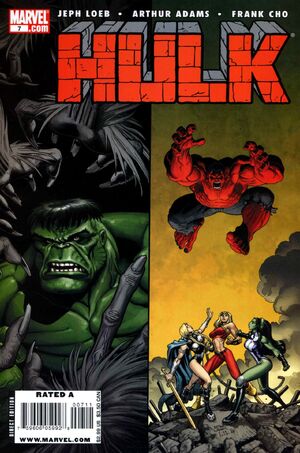 Appearing in "What Happens in Vegas"Edit

Synopsis for "What Happens in Vegas"Edit

Synopsis for "Hell Hath No Fury..."Edit

Jen is trying to reach her friends to make a team and go out to hunt Rulk. Tundra and Valkyrie accepte and meet her at the Helicarrier, where Maria Hill informed them about the Red Hulk. Aftera few days they found him on Mount Rushmore where they fought him but Red Hulk has the advantage and hang with a chain the She-Hulk of the edge of the mountain.

Retrieved from "https://heykidscomics.fandom.com/wiki/Hulk_Vol_2_7?oldid=1653209"
Community content is available under CC-BY-SA unless otherwise noted.