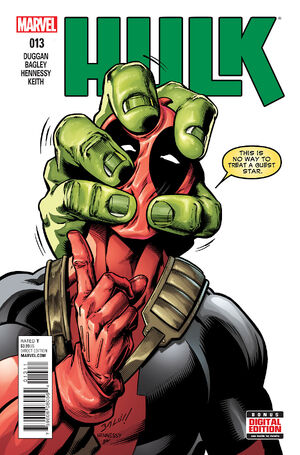 • DOC GREEN hires DEADPOOL for a very sensitive mission. Is he more trouble than he’s worth?

• DID WE MENTION DEADPOOL?

A flashback in this story affects the chronology of the following characters:

Retrieved from "https://heykidscomics.fandom.com/wiki/Hulk_Vol_3_13?oldid=1641615"
Community content is available under CC-BY-SA unless otherwise noted.