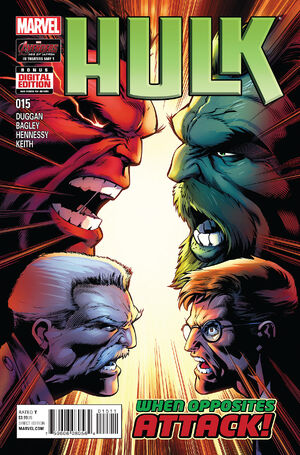 Want to know why I'm going to win, Ross? Because... I am the alpha! I am the omega! I am the strongest one there is! I am the Hulk!

As he falls to his impending death, Bruce Banner's life flashes before his eyes. He thinks about how he wanted to be strong but was abused by his father. How he wanted to be a great scientist, only for it to destroy his life forever thanks to the gamma bomb. How his attempts to fix things failed, especially in relation to his marriage. Now, he finds himself falling from high in the air after Doc Green was knocked out during a fight with the Red Hulk. Not wanting to die, Banner tries to wake Doc Green up by breaking his finger. The ploy works, and it is Doc Green who impacts harmlessly into the ground instead of the highly vulnerable Bruce Banner. He is quickly joined by the Red Hulk and their fight continues. Their blows continue to be felt across the continent, from the subterranean realm of the Mole Man to the S.H.I.E.L.D. helicarrier, and Avengers Mansion. Maria Hill mobilizes her troops while Steve Rogers calls in every Avenger that is available to assist in this crisis.

The battle rages on, with the two Hulks crashing in the middle of Joshua National Park. There, Doc Green tells Thaddeus to give up and take the cure, get his life back. The Red Hulk refuses, saying that this is his life now and manages to get the Doc in a headlock. He then begins taunting Doc Green, telling him that this will be a mercy killing and prepares to snap his foe's neck. However, before he can, Doc Green manages to break the Red Hulk's arm and land a tooth shattering blow. Lifting the Red Hulk up over his head, Doc Green shouts that he is the strongest there is and as he slams Ross into the ground he proclaims that he is the Hulk. With the Red Hulk incapacitated, Doc Green injects him with the cure, reverting him back to human form. As a military vehicle approaches, Ross demands to know why Doc Green gets to be the only monster. The Doc tells him that he has a plan for himself, but for now, Ross better focus on answering for his crimes. The soldiers arrest Thaddeus Ross for abandoning his post and take him away. As they leave, Doc Green begins writing a message in the sand and allows himself to change back into Bruce Banner. Banner looks down and reads the message, it says "we need to talk."

Doc Green is walking through Brooklyn on his way to the law office of his cousin Jennifer Walters, the She-Hulk. As he approaches he is confronted by an army of S.H.I.E.L.D. agents, the Invisible Woman, as well as Iron Man, Captain America, She-Hulk, Thor and Vision of the Avengers. Doc Green tells them that he is not looking for a fight. When She-Hulk asks Doc Green why he has come, he informs them all that he is dying.

• Doc Green proves once and for all: science is difficult, even for the smartest of us.

• The US military makes a surprising change to their gamma-monster policy.

Retrieved from "https://heykidscomics.fandom.com/wiki/Hulk_Vol_3_15?oldid=1734366"
Community content is available under CC-BY-SA unless otherwise noted.