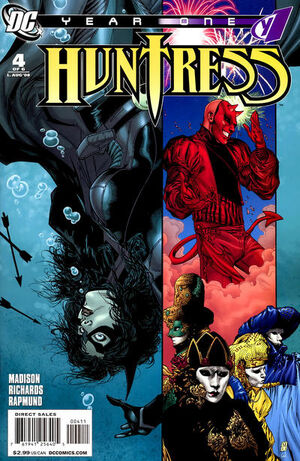 I had to avenge my family, blood cries for blood. But more blood is just more blood.

Appearing in Part IV "To the Edge"Edit

Synopsis for Part IV "To the Edge"Edit

In his bedroom, Stefano Mandragora is being held at the end of a crossbow by a costumed Helena Bertinelli. After mocking her costume he throws a knife at her--which she catches--and signals for guards. Bertinelli subdues the guards, then pins Mandragora to the door with her crossbow by his hands. Fixed to the door he accuses her of stealing his money, and she rebuts that he stole her money and had her family killed in front of her when she was eight years old. She demands the name of the trigger man, which Mandragora doesn't know, and she kills him with a shot to the chest, causing Mandragora to remark that he now has the marks of the Stigmata as he dies, throwing his drink at her. Contemplating her actions, Helena leaps out the window. While guards search for her, "The Pope" calls out to her and tells her she's done him a favor, and he can do one for her, then tells her to come to Mandragora's funeral.

At her hotel, Helena overhears a group of Americans from the US Attourney's office, including legal librarian Barbara Gordon, in town for a seminar about the Mafia, toast the recent death of Stefano Mandragora. She warns them against toasting anyone's death, even that of someone like Mandragora, telling them "it's naive to think death solves anything" before leaving them be.

Helena attends the funeral, at which The Pope non-verbally points out the hitman for her families deaths. She follows the man, surveilling him for 24 hours and ending up in Venice for Carnival. The hitman puts on a devil costume for the event and she continues to follow him, only to lose him and have him ambushed her and tackle her into nearby water. While they fight in the water the man realizes she was following him and must not "want" help, then ties her hair to a pipe and leaves her. After she cuts herself free, the man simply tells her he plans to hang around Venice getting drunk for several hours, then fly to Gotham in the morning. Leaving, he advises her to get better at stalking her prey, then surprise him, then she'll be "worth" killing. Realizing she can't go after him again, she instead visits a church, then flies to Gotham.

Arriving in Gotham, she has her taxi take her directly to St. Augustine's Church. She arrives in the middle of a wedding, and from across the street is shocked to see groom Tony Angelo walking out with his blonde bride. Changed into costume, she follows the wedding party--which includes Bruce Wayne discussing doing the "laundry" for another man assuming they can convince his board--to Wayne Manor. Helena laments the fact that only vengeance got her to return to Gotham, not Tony asking her to out of love, then remembering a phrase Antonia Asaro used to say: "Who gets married will be happy for a day, who butchers a pig will be happy for a year," begins marching onto the Manor with the intention of "dragging at least one boar's head out."

Retrieved from "https://heykidscomics.fandom.com/wiki/Huntress:_Year_One_Vol_1_4?oldid=1434801"
Community content is available under CC-BY-SA unless otherwise noted.