Tainted Love is an I... Vampire storyline published as part of The New 52. Following the timeline reboot in Flashpoint, it establishes Andrew Bennett's continuity in the DCnU. It's the debut arc of [[Joshua Hale Fialkov 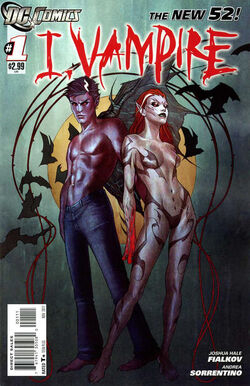 Tainted Love is an I... Vampire storyline published as part of The New 52. Following the timeline reboot in Flashpoint, it establishes Andrew Bennett's continuity in the DCnU. It's the debut arc of Joshua Hale Fialkov and Andrea Sorrentino on their new I, Vampire volume. The storyline leads directly into the Rise of the Vampires crossover with Justice League Dark.

Andrew Bennett and Mary, Queen of Blood discuss their relationship. Mary has amassed an army of vampires across the world to declare a holy war on humanity. Bennett tries to persuade her not to, but they disagree on ideology. They have sex one last time and he wakes up to a pile of bodies outside his window. He tries to put down the survivors, but he's ambushed by a mob of full-bloods. They chase him into a subway station where he's unable to stop them from devouring an entire train of people.[1]

Mary delivers a speech to her followers in the Blood Red Moon, declaring that they deserve to inherit the Earth from humans. Andrew is given one last chance to join them, then she orders his execution. She knows that even 300 of her minions cannot kill him, but she wants him viewed as a genocidal traitor to their race.[2]

Bennett assembles his team to hunt down Mary, including his closest friends Professor John Troughton and Tig Rafelson. In flashback he remembers his first meetings with both of them. Mary leaves them a message to find saying that she will be in Gotham City next. Troughton remarks to himself that as Mary's sire, Bennett could end the bloodshed by killing himself if he was willing to die.[3]

In Ohio he meets another vampire fighting to control his urges. Bennett sees a kindred spirit and teaches him to turn into his wolf-form, as a lesson about willpower. This vampire begins to lose his humanity, and uses the wolf-form to go on a killing rampage. He's stopped by John Constantine in a local bar, who conjures a small sun to put him down. Bennett arrives and stops Constantine from killing the vampire so he can do it himself. Before leaving, he warns Constantine that his magic-using friends will need to be ready in case he fails to stop the Blood Red Moon. On his way out of the bar, he picks up a locket and realizes that the vampire was Tig's father.[4]

When they arrive in Gotham City, the train the Blood Red Moon slaughtered is empty and filled with blood. The vampires slaughter GCPD officers and take over a jail to train their new converts. Batman appears to investigate, and makes an uneasy alliance with Bennett. Tig and Troughton help them track the vampires down, and they enter the jail cells swarming with new vampires. Mary shows up to greet them in person.[5]

There is an epic battle, until Bennett realizes their sire is not Mary and kills the boy responsible. This cures the new vampires, but the full-bloods are still active. Troughton helps the cured humans escape, but Tig learns you can stop a vampire by killing its sire. She misunderstands this, and Troughton is too late to warn her that this is only possible in the first 48 hours. Batman stops Bennett from killing Mary, as he is opposed to killing and believes she must be subdued. Tig walks up behind Andrew and murders him, stabbing him through the chest and cutting off his head to stop Mary. Mary is unharmed and this causes a powerful new vampire to rise from the ground underneath them.[6] Elsewhere Madame Xanadu screams that Andrew Bennett is dead and "Cain, the sire of them all, has risen."[7]

Retrieved from "https://heykidscomics.fandom.com/wiki/I,_Vampire:_Tainted_Love?oldid=1507247"
Community content is available under CC-BY-SA unless otherwise noted.