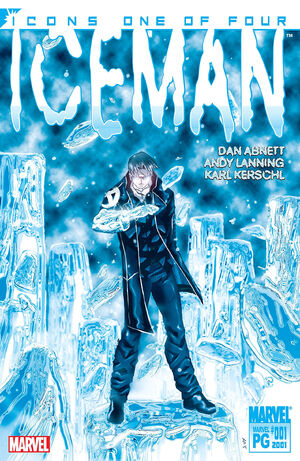 Appearing in "The Iceman Cometh"Edit

o THE SCOOP: The coolest mutant around gets a chance to shine in this four-issue X-Men Icon series!

o THE STORY: Bobby Drake is the jovial prankster of the X-Men, a young man who always keeps his cool… except when it comes to ex-girlfriends! Contacted by a long lost love, Iceman travels to THE other side of the world to lend a hand -- but will he get burned by his former flame? What insane scheme awaits Bobby in Hong Kong... and will the frozen funny man get scorched in the land of the rising sun?

o THE CREATORS: Written by Dan Abnett and Andy Lanning (Legion Lost, Legion Worlds) and illustrated by Karl Kerschl (DEADPOOL), this series will be hot … or cool as the case may be!

o THE FORMAT: Each issue of this monthly, four-part mini-series will be 32 pages, with ads.

Retrieved from "https://heykidscomics.fandom.com/wiki/Iceman_Vol_2_1?oldid=1646829"
Community content is available under CC-BY-SA unless otherwise noted.